Leslie Howard: I suppose I break a lot of Hollywood rules (1936)

I found this article by William Anthony (I guess this is a pen name, but I could not find any information about him), published on the March 1936 issue of  Movie Classic, quite amusing. Leslie Howard was a man who defied any kind of stereotype; he hardly fit the polished character carefully built up for him by the Hollywood system (and by himself–). “Leslie Howard just likes to break rules for the fun of it when it begins to look as though life and the pursuit of art were being taken too seriously,” says the author. Leslie’s sense of humour was well known, “a dry martini brand of humor,” according to the author’s definition. He often indulged in quiet, stinging irony. The anecdote about The Petrified Forest is amusing and utterly convincing; when reading it, I felt like I was on the set to watch that scene.

He doesn’t do things that Hollywood expect of stars. But he enjoys life!

[…] “I don’t like rules like that. If I feel a sudden and overwhelming yearning to discuss the love-life of an Argentine beetle or the effect of Negro spirituals on modern dance music, I want to discuss it and not have people edge away to another group where the topic of conversation is what that producer said to this star about–” he poked at his salad suspiciously– “gaining weight. I suppose I break a lot of Hollywood rules.” […] 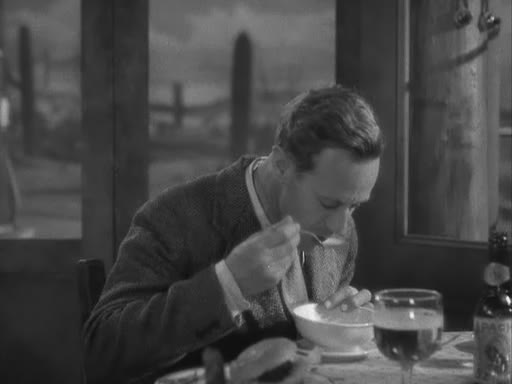 An amusing anecdote – Leslie Howard in The Petrified Forest

← Hollywood Is Make Believe, Romance Is a Part Of It Like Cameras and Lights, 1934
Please, help the Leslie Howard Project on Kickstarter! →

3 thoughts on “Leslie Howard: I suppose I break a lot of Hollywood rules (1936)”