The Animal Kingdom was adapted from Philip Barry’s play, a great success at Broadway and one of the most important roles in Leslie Howard’s stage career.
As Mordaunt Hall wrote on the New York Times, “never has Mr. Howard been seen to better advantage, for having acted so long in the play, he was well at home in his part”. In fact, after a tepid beginning, the play had been adjusted and rewritten to enhance Leslie’s acting qualities, and he had played the Tom Collier role for a very long time. Leslie’s friend William Gargan appeared both in the play and in the film, too.
Myrna Loy found in this film a crucial role for her career. After being trapped for a long time into exotic roles, this was her first opportunity to show her great qualities as a comedy actress. In the role of Cecilia, she is very natural, and extremely sexy and charming too, especially in the two scenes in which she openly seduces Tom.
The film is a clear example of pre-code cinema, and it could not have been made a few year after. Tom and Cecilia openly discuss his earlier cohabitation with Daisy, and he even talks to his wife about his brothel experiences. There is also an exchange of roles between the wife acting like a mistress and a mistress acting as a wife.

Tom Collier, a young, free-spirited publisher – whose father is a rich, influential man – has just decided to marry Cecilia when his ex-girlfriend Daisy, an artist with whom he had lived for some years, comes back. Tom does not want to lose Daisy’s friendship and Cecilia does not seem jealous of her, but Daisy is upset by Tom’s engagement with Cecilia that she leaves again for a few months.
Cecilia does not like Tom’s butler and friend “Red” Regan, and try to persuade Tom to get rid of him. Even worse, she does not understand Tom’s ideas about books, and persuade him to publish cheap literature. When Daisy comes back, Cecilia invites her to a party, together with other “bohemian” friends of Tom’s, to show her husband how different they are from their high-society friends. During the party, however, Daisy sees Cecilia kiss her friend Owen, and talk to him of selling Tom’s publishing company. Daisy is shocked and leaves the party with her friends.
Tom’s father would like his son to live with him, and Cecilia is very willing to accept this offer, but Tom refuses and Cecilia punish him by locking her door. Then she organizes an intimate dinner with her husband and try to manipulate him; but Tom understands his wife’s intentions and leaves with his friend-butler to join Daisy, “his wife”.

If “The Animal Kingdom” leaves something to be desired in the way of imaginative camera work, in the way of a departure from the technique of the stage, it remains nevertheless a creditable photoplay, retaining the best features of the gifted Philip Barry. It is flawlessly acted, thanks to the fine work of Mr. Howard, Miss Harding, Mr. Gargan and Myrna Loy, who, we almost forgot to tell you, plays the role of the conscientious but unsuccessful wife.
(Martin Dickstein, Brooklyn Daily Eagle, December 30, 1932)

The screen of the RKO Roxy gives to many of the admirably photographed scenes a sense of depth and the vocal delivery is excellent. Never has Mr. Howard been seen to better advantage, for having acted so long in the play, he was well at home in his part, that of Tom Collier. […]
Miss Harding has the role of Daisy, which she plays agreeably enough, but not always with the spontaneity one would wish. Her beauty, however, atones for her somewhat too placid performance.[…]
Edward H. Griffith, the director, keeps the story folowing interestingly, although occasionally he is a little too fond of close-ups and of abrupt entries. Yet the incidents glide along nicely without any muddling.[…]
Another player who does a capital work is Miss Loy as Cecelia. She speaks her lines nicely and suits the action to the words and some of her best scenes are with Mr. Howard. […]
It is a picture in which the playwright’s ideas have been adhered to faithfully. It has the subtlety and restraint of the stage work and the settings are always in good taste.
(Mordaunt Hall, The New York Times, December 20, 1932)

Leslie Howard and Ann Harding are so perfectly cast that you forget they are playing a part. They are Tom and Daisy. And thank Heaven, the play has not been sacrificed to give all to the star. Ann Harding actually has less footage than Myrna Loy– but what she does with it![…]
William Gargan is simply grand as an ex-pug butler. Entire cast is excellent. Don’t miss this.
(Photoplay, February 1933) 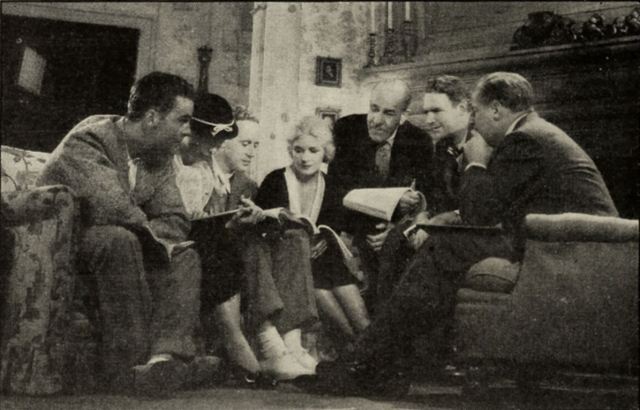 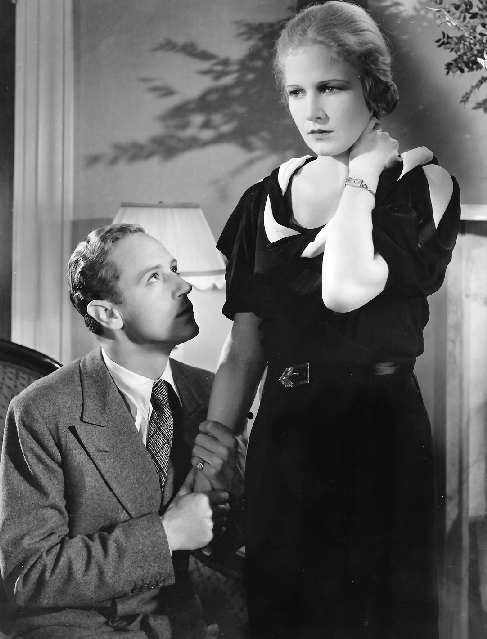 Leslie Howard and Ann Harding in The Animal Kingdom

Leslie Howard and Ann Harding in The Animal Kingdom 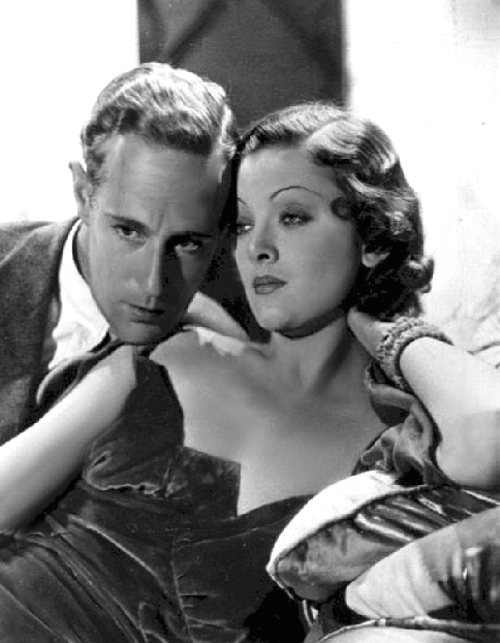 Leslie Howard and Myrna Loy in The Animal Kingdom

Leslie Howard and Myrna Loy in The Animal Kingdom