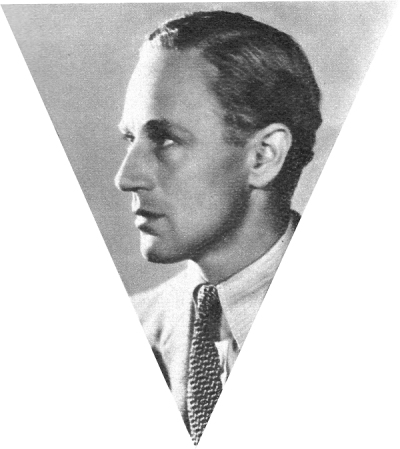 (Above) The actor. (Below) The father. His daughter is going-on-eight and wields a sort of super-guardianship over her father. The little girl is delightfully free from self-consciousness and awkwardness. She speaks with the clipped accents of Britain 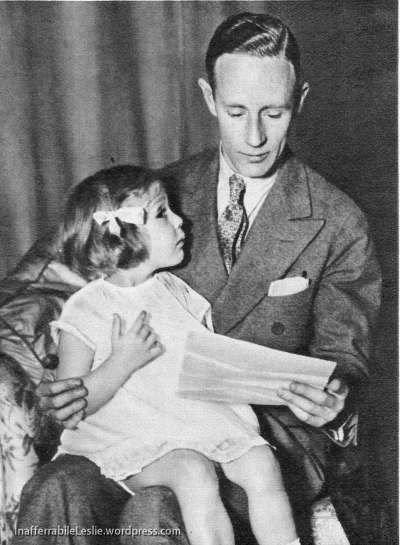 Leslie Howard’s brief appearances on the screen–in “Outward Bound,” “A Free Soul,” “Five and Ten,” “Devotion” and “Reserved for Ladies” were more than enough to win him a fan-following and ever since he returned to the stage his many movie fans have been wondering when he’d make another picture.
Now comes the good news that he has gone to Hollywood to star in a talkie version of “The Animal Kingdom,” the Philip Barry play, and also to appear opposite Norma Shearer in “Smilin’ Through.”
Leslie Howard is one of the most sensitive and certainly one of the most intelligent of our modern actors. Those of us who saw him as the young suicide in the stage play, “Outward Bound,” and who later saw him as the troubled, bitterly wise drunkard in the screen version of the same play were amazed, I think, at his ability to interpret two parts which differed so widely. His work in the stage version of “The Animal Kingdom” and in “Reserved for Ladies,” English-made film, shows his astonishing ability to adapt himself to the rôle–not the rôle to himself–and his refusal to be typed.
Mr. Howard has been for some time a great favorite with the theatre going public. His screen rôles will certainly enlarge the number of his admirers and those of us who saw “The Animal Kingdom” on the stage will look forward to seeing it on he screen at a not very distant date. And meantime a good many people are speculating about Leslie Howard and wondering what Hollywood will “do” to him.
I do not believe Hollywood will do anything to him. What he may do to Hollywood is another matter.
He has had, of course, one experience of the Incredible City and is now going back for more. But I doubt very much if Hollywood or anything connected with it can have any definitive effect upon him.
I had a talk with him in the blazing sunlight on the terrace of his hotel apartment. He likes the sun. We sat out there together and looked past tall buildings to the new green of Central Park and talked about a thousand and one thing. I talked, mostly.

Leslie Howard is extremely shy and extremely nervous. He was, in all probability, extremely bored a the mere idea of an interview. But his natural courtesy which is gentle and marked and unusual, would never permit him to display boredom. He is resigned, one supposes, to publicity and its consequences, which are bound to follow his great success. Also, he had a friend at court, for little Leslie Howard, the small fair-haired daughter who is going-on-eight, removed a good deal of the formality from the occasion by a sort of super-guardianship over her father and also by entertaining me with parades of really delightful dolls. Little Miss Howard appears to be on terms of the most charming and unaffected comradeship with her tall, blond, shy father and is, herself, a personality, a sort of Alice-in-Wonderlandish personality, with the good manners and bright, clipped speech and freedom from awkwardness or self-consciousness which seems to be native only to the English child.
Mrs. Howard joined us just for a minute. She is an extremely beautiful woman with a serenity of appearance and manner which is most refreshing and unusual when one considers the rather feverish aura which surrounds our own restless beauties.
It was not easy to induce Mr. Howard to talk about himself. So we talked about country places and England and books and mutual friends and children and schools and the Howard son who was still in school in England and who will by this time have joined his parents and his sister for the trek to Hollywood. We talked about certain manifestations of American life which are unknown to Mr. Howard. But we didn’t talk much about Mr. Howard, because, quite obviously, he didn’t want to.

Here is at least one actor whom success has not harmed. It is quite extraordinary, because most of them, almost against their own wills, seem forced to take on a little rather hard veneer which seems to be one of the penalties of success. This is not so with Leslie Howard. He has fewer affectations than most men and by that I do not mean merely most actors. He is not vain. He is so little concerned with self that when he reaches Hollywood he will be a voice crying in the wilderness, or, rather, he will be a deep silence in a wilderness of voices.
Finally, before I left I did manage to induce him to talk a little about the stage and the screen. He feels that the motion pictures which most closely follow the stage play technique, even to economy of scene changing, are the best the motion pictures have as yet produced. He did not, he told me, find the special acting technique of the screen play difficult. And what he finds most interesting in the entire field of motion pictures is direction. I imagine the he would rather direct a picture than act in it. He is a man who loves his art but does not care very much for his profession. There is a difference, you know. But as an artist, he has more integrity than any actor whom I have met in a number of years.
Leslie Howard is to my mind the most “un-Hollywood” man who will ever reach the film city. When I say that, I am thinking of the blatant, noisy, glittering part of Hollywood. I cannot see that he has anything whatever in common with that side of Hollywood–which is, after all, the only side of Hollywood that ever gets any publicity. He lacks all desire or instinct to push himself forward. He has an extremely unique personality but it is not flamboyant, it is not highly colored. I cannot imagine him indulging in eccentricities, fads, foibles, extravagances.
He will make good pictures because he cannot help himself. And he will make a few friends of the enduring and unusual type. Otherwise nothing will change for him, except the climate. He will work hard and give his best to the motion picture, the best that the motion picture can demand from him. He will do that because, besides being honest, he is honorable. And in that way, he may have some lasting effect upon Hollywood and future motion picture.

No, wherever he goes his life will not change. It will not change because it is rooted. It is rooted first of all in his family, because he is a strongly domestic man. It is rooted secondly in his life on the stage, in his home in England,  in the home and friends he has made for himself in America.
He is a person who is completely self-contained. He has made his own life and he has created it from enduring things and Hollywood to him will be just another place in which he must do his work and do it as well as possible. The hot sunlight of adulation and vanity, the darkened skies of terror and uncertainty, the storms of gossip, the winds of rumor, will have no place in his life. He will find a house and make a home of it, temporarily; he will have his wife and his children with him, he will meet old friends or make new, he will go quietly about his business uninfluenced by greed or self-conceit.
He will be courteous about Hollywood and everyone in it, because that is his way. I doubt very much if he comes out in print with wild praise or wilder disparagement of that particular part of California. He will merely work and say nothing, or when he has to say anything it will be courteous and pleasant. But I am wondering, whatever he thinks of Hollywood, what Hollywood thought of him in the past and what Hollywood will think of him in the future.
For the rest, he is, as you know, very good looking in a way which does not conform to any special pattern. He has a delightful and memorable speaking voice. And he is looking ahead to his return to England after his picture has been made in order that he may go home to the country house he bought there last year and in which he has never lived. He will “do” a play in London and spend all his free time at home.
I’m wondering at the minute if his trousers are always creased in such careful folds when he is talking to interviewers and if his little daughter succeeded in making him take her for the swim at the club for which she was so earnestly pleading him when I left.