The great lover of the screen as he appears in character in “Berkeley Square.”

“No artiste should make more than three or four pictures a year.” That is the dictum of Leslie Howard, who, besides having risen to the dizziest heights of popularity as a screen lover, is also the most independent actor either in Hollywood or over here, with the possible exception of Charles Chaplin, whose film output is also reduced to the minimum.

Howard sincerely believes in this policy, which has been to a large extent responsible for keeping Douglas Fairbanks and Mary Pickford so long in popular favour.
“Familiarity breeds contempt in the ordinary walks of life,” Leslie Howard affirms, “and the repeated sight of an actor’s face tends to diminish his value and popularity.”
“My asserted independence is really no such thing. I have set my mind on making but three pictures a year and for the reason that I don’t believe an actor should be seen more often.
“This is easily understood through a simple example. If you see a friend too often you are apt to pick flaws and think the less of him – a clear case of familiarity breeding contempt.
“With but three pictures a year an actor remains a welcome stranger – a person you are glad to see, perhaps a bit reluctant to leave.”

He has already made Secrets with Mary Pickford, Fellow Prisoners with Douglas Fairbanks jun., and is now engaged on Berkeley Square, the chief rôle of which he played on the London and New York stages. But more of that anon. Let us consider for a minute the independence of the man. He rejects tempting offers with a careless abandon that astounds even the most securely placed film star.
Not so long ago he was offered the most coveted assignment of the year – the lead opposite Greta Garbo in her first picture after a long absence in Sweden.
The enormous salary offer was turned down without a moment’s hesitation. No sum was large enough to tempt this English actor when he was due in London by the end of June, to do a stage play and a film for Gilbert Miller.
Therefore, our Mr. Howard “tank he go ‘ome,” and Hollywood, dreaming of the vast wealth he is turning down, “tanks all Englishmen go quite mad.”
Before that he refused a £ 15,000 offer to play opposite Marion Davies.
A third instance of his independence is instanced when, offered a tremendous sum to play opposite a great feminine star, he refused point blank because he considered the rôle unsuitable, not to himself, but to the star he had been asked to support. 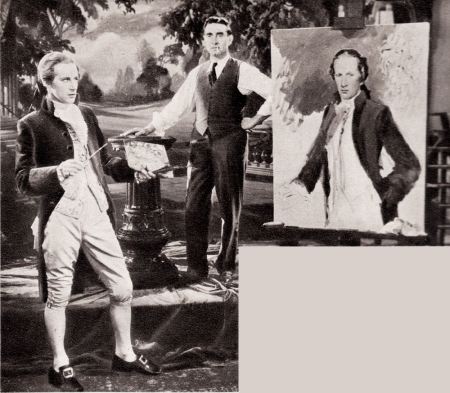 Above: Leslie Howard and Frank Lloyd, the director of “Berkeley Square,” with an oil painting of the former.
Below: The star with Myrna Loy and Ann Harding in “The Woman in His House.” Right: Heather Angel, who plays opposite Howard in “Berkeley Square”

To some this may sound quixotic, to others a show of superiority for the sake of an effect. Quixotic this blonde Englishman may be, but he is far from being a show-off.
He explained his attitude between scenes of Berkeley Square, the Jesse L. Lasky production for Fox which is to be his American swan song for the remainder of the season.
“I meant no offence to the producers of the lady when I refused to appear in that screen production,” he said. “I didn’t want to play in what I sincerely felt was to be an inartistic mess for her.
“In a sense I was protecting myself. After all, acting is my business. I must select my rôles, and my partner in this acting business as carefully as a manufacturer selects the raw stock that goes into his product. In both cases it is the fair thing to do, not only to ourselves, but for the public which pays for the finished goods.”
In view of all this, it is not surprising that Heather Angel is pleased with life, for she has got one of the most coveted screen rôles of the year.
Heather, new to Hollywood, after outstanding stage and screen performances in London, and considerable film work in Berlin, is enacting the rôle of “Helen Pettigrew,” opposite Leslie Howard.
As a leading lady, the petite actress has stirred the hearts of all her competitors with envy, for this honour of playing opposite Hollywood’s most sought-after male star has only been shared to date with a few world-famous stars, such as Norma Shearer in Smilin’ Through, Ann Harding in The Woman in His House, and Mary Pickford in Secrets.
In view of these facts and taking into consideration the fact that Mr. Howard has recently turned down tempting offers, we can be assured that this little girl from Oxford, who is still in her early twenties, has every right to be justly proud and elated.
Yet, strange to relate, outwardly, Heather is neither proud nor excited. She is definitely pleased about the great chance Mr. Lasky and her director, Frank Lloyd, are giving her. But excited is not a word included in this cool young person’s vocabulary.
Earthquakes, bank holidays, salary cuts… nothing excites Heather. The very heavens could fall and she would still remain calm and collected.
Here is a screen star with no past, no love affairs, and no scandals, however mild. “Romance is a silly thing to indulge in unless you mean it to be serious for all time,” says Heather. “I would not care to rush into romances sporadically. My head rules my heart, and I came to Hollywood to make progress.”
There is a pleasing little story going the rounds about Heather’s helpfulness.
The cowboy responsible for saddling her horse in a scene for the film was having trouble in meeting with any success, for he had never handled a side saddle before.
“Let me help you!” volunteered Heather, “I used to ride one of those at home.”
“Thanks a lot, ma’am,” replied the puncher. “These things may be all right where you come from, but in my state a woman is considerate effeminate if she does not ride like a man.”

But to return to Leslie Howard. He considers Berkeley Square his favourite stage play; it brought him his greatest success both here and in New York.
Likewise he is enthusiastic over the screen production which Frank Lloyd is directing on a scale to match Cavalcade.
Howard confesses to a sentimental weakness for this strange and elusive story.
“I would have played it for charity,” he said, “but since it is bad business to do even the things one likes for nothing, I conquered this lapse into a weakness and now draw a rather healthy cheque every week.
“They built the ‘Berkeley Square of 1874’ [sic]” he told me, “faithful to the most minute detail.
“Copied from intricate prints and etchings brought from London to America by me when I produced the play in New York, the eighteenth century London square covers four acres of ground, boasts real brick-fronted residences flanked by cobbled pavements, and a park whose lawns are surrounded by poplars, elms and yew edges.
“Upon completion of the scenes between myself and Heather Angel in the early sequences, the ‘ancient Berkeley Square’ will be torn up, and the thoroughfare existing to-day will be rebuilt at the same site.”
As he sat on a set depicting the “Black Dog” Inn, an exact replica of an old posting house which actually existed on the Plymouth-London coach road, Howard averred that he felt more at home in the frills and furbelows of 1874 [sic] than in the modern lounge suits he has worn in other rôles, for he has played “Peter Standish” at least 1,000 times since the character was born in 1929.
“There is no doubt that Jesse L. Lasky’s film will have a great many advantages over the stage version,” he said, “for the screen is capable of depicting such a variation of scenes in comparison to the few stage sets.
“The film version has another advantage over the New York stage production. Then I had to drink quarts of prohibition ‘near-beer’. Now I can stand up in the inn bar and make merry with the real stuff!”
The English actor will probably go down in screen history as being the first film star to act in the past tense, for as Standish he has to think in terms of to-day, while his material body is acting in terms of the past. This strange intermingling of time, thought and action can, however, be more clearly elucidated on celluloid than was possible in three scenes of a stage play.
“I feel almost parental pride in the transferring of Berkeley Square to the screen, for it was primarily through my efforts that the play was staged in the first place.
“A chance meeting with the author, John Balderston, then a poor newspaper man, led me into hearing details of this strange phantasy, depicting incidents in the past, present and future, and I was very keen to portray this ‘Peter Standish’ who inherits the old house in Berkeley Square and finds himself re-living the diary of his long dead ancestor.”
Less than a month after his first acquaintance with Balderston, Howard had aroused the interest of his producer friend, Alec Rea, with the result that the play was purchased and staged in the West End of London with Leslie in the coveted rôle.