Leslie Howard on Acting for the Screen (1938)

Acting for the Screen

The following article is based on our representative’s interview with Mr. Howard on a recent pleasant but hot summer’s day when a thousand and one different topics were discussed.

THE success or failure of the screen actor depends on whether he does or does not appreciate that the movie is not a good medium for “acting,” as that word is understood on the stage. It is not a creative outlet for the player to anything like the extent of its older rival, and it is quite a mistake to say that the technique of the one derives from the other. While there are a few examples of artists who have been successful in both media, that is because they have conformed to the stage methods on the stage, and completely ignored those methods and adopted others in front of the cameras. This great difference is noticeable by the way in which the two different forms produce a similar emotional response in the audience-— but by entirely different means. It is quite possible for a play to be performed with the actors sitting in armchairs throughout, and for such a play to be emotionally satisfying, but can you imagine more than a few hundred feet of such a thing being anything but an unutterable bore on the screen? The kernel of the difference was expressed some years ago by Jacques Feyder, the French director, in the words: “On the stage the dialogue creates the situation, on the screen the dialogue arises out of or is corollary to the situation which has been created by action.” Dialogue, purely as such, is not necessary to the movie, because the movie is not a literary expression.

Consider the proximity of the West End stage to the London Studios. Then remember that Hollywood is 3,000 miles away from Broadway. Hollywood may use stage actors, but it moulds them to its own purpose. Many English actors merely condescend to appear on the screen, and the condescension is obvious on every frame. They bring (and this applies particularly to the younger generation) the West End tradition of good manners to such an extent they are better mannered than any well bred person ever ought to be. Or, in lower-class parts, they swing to the opposite extreme so that, for example, their Cockneys are neither good Cockneys nor even good caricatures. The same misfortune applies to the average British producer, scenarist and director– they are dominated by the stage. Hollywood respects the stage, but treats it at best as only on an equal footing. The British director does not seem to have the same quick perception on the set of the movie faults of his artists, or, if he does, he seems to be less able to correct them. The British producer and scenarist are content to photograph a stage play; in America the play is adapted to the vastly different demands of the movie medium. In adapting a novel to play form, you would not have simply a narrator appear on the stage and read several selected portions of the novel. Yet that is analogous to the method of screen adaptations in this country. Why make a good or a big name play into a poor movie? You only throw away the goodness of the play, and the big name of the playwright becomes valueless, even as publicity.
It is possible that the secret of Hollywood’s success lies in the fact that the cinema is pre-eminently America’s method of self-expression. She has no monopoly of screen methods, and it is open to other countries to copy her if they wish. But slavish copies are notorious failures. They lack the spontaneity and zest of original creation. Think of the different ways in which France, Germany and Russia have developed their own movie-technique, our only analogy here being those often-times excellent little documentaries. In most of them the acting as such is amateurish and camera shy, but every now and then one is conscious of a ravishing gem of realism or near realism, a spontaneous reaction which is just right for the movie, or, in the words of John Grierson, an action that time has worn smooth. From this origin may eventually spring England’s special contribution to the commercial cinema, as I am sure that, despite the handicap of stage tradition which hedges it around to-day, a real “movie” method which is recognisably English can be developed by English technicians.

The American cinema is a growth of American consciousness. It is not international. The fact that Hollywood is full of European names is merely symptomatic of the absorption of other nationals by America as a whole, a facet of America’s history in the making. It is not a proof that you must have other nationals to make good pictures. The films themselves are 100% American.

England can do the same as America has done. Already it is true to say that her technical staff is as advanced in movie methods as Hollywood, and its artists could easily become so. Why, Hollywood itself is cramful of English people who have very quickly absorbed the traditions of movie acting and who have been enormously successful. They have been “themselves” on the screen rather than consciously acting a part, which leads to the well-worn cliché that the problem of good film acting is one of good casting. To the producer who has to think of his budget it is obviously safer to use an artist who has proved successful in a certain role, and who is certain to be equally successful again in the same rôle, than to run to costly experiments and try out someone who may be a flop. Two danger points should be noted in this connection– over-acting and under-acting. I saw an English picture recently in which the latter technique was employed to give an impression of realism, but it was such exaggerated under-acting that the result was dull and boring. Over-acting in itself is not quite so dangerous. And, in the purely movie sense, it is only a flamboyant type of expression which is actually native to the movie, and does not, as many people imagine, derive from the stage. The Barrymores are a case in point, particularly John, who on the stage was never a character actor but always played straight parts.
The lack of any very long-established tradition, and the fact that films tend to favour type casting, has many advantages. Primarily it gives to American pictures a feeling of sincerity in the players that you rarely get elsewhere, except, as I have said, in rare moments in English documentaries. The English film is a set piece consciously acted, the American is an hour and a half of realism and drama accidentally caught by a camera. And, although the basis of the story may not bear inspection two minutes after it is over, at least during the time it is running you have the impression that you are seeing real people in a real setting.
Nor can one ignore the background of main of the actors and executives themselves. Most of the latter are men of quite humble, even East Side, origins, with little or no pretensions to education as such. Maybe just for that reason they are more on the common level of the man who sees the films, and in so much the better position to assess the common level ol mass appreciation. Similarly with the artists. Most of them are the common man’s idea of what such characters should be, and if Joan Crawford plays the part of a real lady it is the housemaid’s or the shop assistant’s conception of the lady she herself would be in such circumstances, while it is possible that an English interpretation of the same part might be truer to actual life, but give an impression of the ultra-refined lady that she would certainly not like to be.
I do not mean by this that every part should be played only on a moronic conception of it, that technique should never try to be intentionally highbrow, or that dialogue previously mentioned should be eliminated. On the contrary, I am all for every advancement in technique that can be brought to the assistance of the film medium. Take the question of, say, the stage soliloquy, with which I am very anxious to experiment on the screen. I believe it is possible to go still further with the spoken thought idea even than “Strange Interval.” I would like to tackle one of Shakespeare’s characters in this manner, particularly one of the characters much given to the habit of soliloquising such as Hamlet or Macbeth. It is my firm conviction that even greater significance could be given to the psychological working of their minds by genuine movie methods than is possible on the stage. For example, take the scene in Macbeth where, right at the height of the drama, it is announced to Macbeth that “The queen, my lord, is dead.” Macbeth replies:

She should have died hereafter.
There would have been a time for such a word.
To-morrow and to-morrow and to-morrow
Creeps in this petty pace from day to day,
To the last syllable of recorded time.
And all our yesterdays have lighted fools
The way to dusty death. Out, out, brief candle;
Life’s but a walking shadow, a poor player
That struts and frets his hour upon the stage
And then is heard no more; it is a tale
Told by an idiot, full of sound and fury
Signifying nothing.

In this speech his whole spoken reply to the announcement is really contained in the first two lines, the rest only shows that the total effect of hearing of Lady Macbeth’s death is to produce from him a dissertation on the fickleness of life. My conception of this scene would be to have the first two lines actually spoken by Macbeth in fairly close shot, then cut back to a big long shot showing the actor in a large hall, and as he goes out the voice would be heard but the lips would be closed. Macbeth by his actions would show what he was thinking, and that is the main function of movie– to be a visual medium.
When all is said and done, the part of the movie that interests me most is the only part that is really creative, that of the producer, or better still the producer-director in one. The stage artist can be creative, but screen acting is mainly utilitarian. It is the accumulation of all the little bits of realism or apparent realism put together in the most significant order that makes the movie what it is. Next to the producer, the cutter is the most important “artist” in the creation of a film and it is to these two people that we must look for the development of the appeal of the film. Universality of appeal may not in itself be a virtue, but it remains an enormous commercial asset. 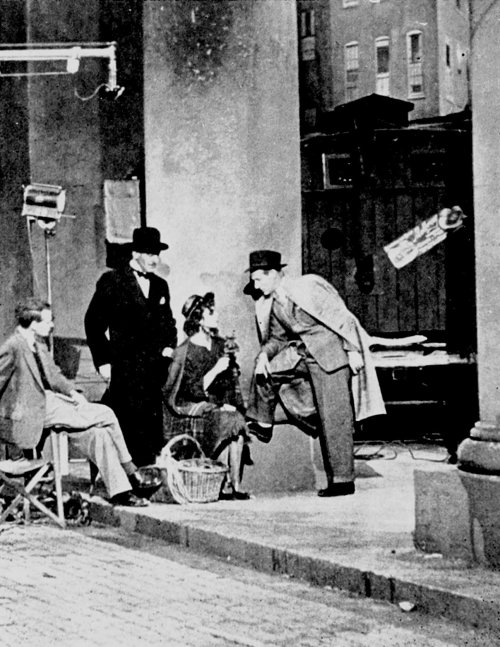 (Stills accompanying this article by Eugene Pizey from the Pascal production, “Pygmalion.”)