Act I, II and III. In the Morning Room of The Tweedle House in Murray Hill District of New York 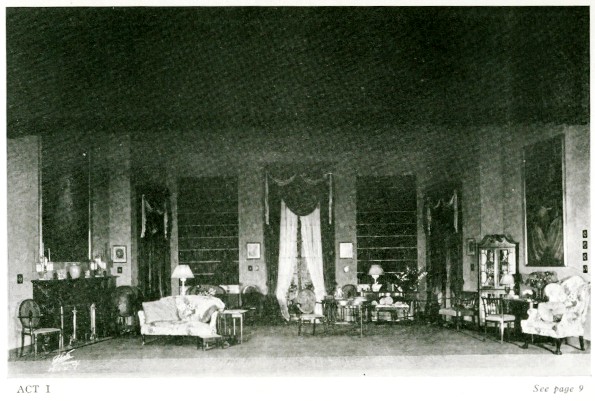 Those who foregathered at the Adelphi enjoyed a delightful little farce that contains many good lines and situations with the laughs coming close as punctuations. Many of its complications are ready-made, of course, but they are nicely tailored and finished, and the piece thins out temporarily only in the second act.It tells a smart little story based on an old friend tried and true, the time-honored and honorable Mistaken Identity, and is presented snappily by a cast that is excellent throughout. Taken as a whole it is a good evening’s light entertainment, and is remarkably wholesome when compared with some of the more recent effusions from which the theatre-going public has suffered.
[…] Leslie Howard, Genevieve Tobin and Glenn Anders have what might be called the principal roles, although the success of the play depends on an even presentation throughout. This, it had with Florence Edney and Gaby Fay of the adequate cast lending excellent support to the chief burden-bearers.
(The Philadelphia Inquirer, September 24, 1927)

“The new farce that came to the Bijou Theatre last night, […] is by Leslie Howard, a pleasant and practiced young English actor. Mr. Howard writes in addition to acting, and he writes well. There is humor in “Murray Hill”, plenty of it, humor nicely worded. But it is the sort of humor that exists lonesomely in lines, and one line does not, by leading helpfully to another, cause the play to reach effective climaxes. Mr. Howard is a pleasant playwright until he gets to the point and then he doesn’t quite know how to make the point. His play is, therefore, though funny enough at important moments, not nearly funny enough when it should be funniest. And quite often it seems merely silly.
The plot concerns three old maids – no, one of them had been married, married for three weeks when her husband ran off with a tight-rope walker. He didn’t care a bit for the tight-rope walker when she wasn’t tight-rope walking, and if the wife had been able to walk a rope she could have held him easily. There is another maid, too, but not an old one. One day she found her eyes glued to those of a handsome young man standing on the curb at Fifth Ave. and 58th st. as she drove by in her carriage and pair. All four ladies live tranquilly in Murray Hill, the last spinsters of a long line.
Their nephew is coming from Chicago that day to see an aunt’s death celebrated and inherit $ 100,000. He turns up intoxicated and the family lawyer won’t let the prim aunt see him. By mistake they think that a young man who seems to have come from the undertaker is their nephew. It is upon whom the eyes of the young maid has previously been glued. The two had fallen in love on the day of the gluing and now are entranced in sight of each other.
Mr. Howard gets his second act by throwing the drunken nephew in among the maids, old and young, and whittling as much comedy as he can out of the incongruity of the situation, the necessity for both young men’s hiding their real identity and the fact that one aunt gets drunk with the nephew. She even goes off with him to a road house near Bridgeport and doesn’t get home until morning. Meanwhile the undertaker’s assistant has gone off with the niece to get married in Greenwich, arriving after hours. This young man turns out to be no undertaker’s apprentice at all. He’s a millionaire.
You will note that as a playwright Mr. Howard is not exactly fecund. This sort of thing has been done before. But not always with the charm that is to be found in this new dramatist’s dialogue.
Leslie Howard has staged the play and himself plays a leading role. So it hasn’t had the advantage of being cut and doctored and touched up by a good director. Playwrights who direct their own plays usually ruin them. As an actor, Mr. Howard is as good as usual when as author he gives himself the proper opportunities. The most amusing member of the cast is Gaby Fay as the tippling aunt. Genevieve Tobin, less determinedly bewitching than she has a habit of being, plays the role of the niece therefore agreeably. Gleen Anders, John Brewer, Florence Edney and Alice May Tuck do all that Mr. Howard can expect of them.”
(Arthur Pollock, The Brooklyn Daily Eagle, September 30, 1927)

“As the author of a farce, entitled “Murray Hill,” produced at the Bijou last evening, Leslie Howard is not so engaging as he is on the stage. His pleasing personality and his intelligence in acting have long since made him a favorite in plays by other hands — in “Just Suppose,” “The Green Hat,” “Her Cardboard Lover,” to instance a few. Now, between engagements, he plays a leading part in his first play, a light farce set in one of those gloomy town houses that still persist between monstrous skyscrapers on several New York streets[…]
Mr. Howard’s farce, rather slovenly written, revolves around mistaken identity.When Worthington Smythe appeared in New York to present himself to his desiccated aunts, on the day of a family memorial service, he was too intoxicated to be acceptable. With the best intentions possible the family attorney found himself presenting as Worthington Smythe an attractive young man who said he came from Crumble’s funeral parlors, cheerful morticians, happines guaranteed in every box. From that essential point the farce gamboled through the heart of young Amelia Tweedle, who knew very little about men, involved a wild escapade with one of the aunts and her bibulous nephew and the customary final explanation all around.[…]
When Mr. Howard remains true to the timeless situation of farce he writes better than when he dances off on his own. In other words, when the two young men in his farce, one a disheveled wastrel and the other a young Lochinvar, begin to explain to the assembled aunts just who they are and whence they came they are very amusing. Mr. Howard writes these scenes capitally. Otherwise, “Murray Hill” labors withepisodes and dialogues that must have seemed funny in prospect, but which yield uneven humor in the theatre. Mr. Howard’s gift for pleasant satire sometimes peeps through the maladroitness of his piece, as when he observes of the deceased aunt, musically inclined, that “she had one of those voices that are never quite ready.” The part of Worthington Smythe is also well conceived in its mixture of rollicking good humor and shameless inebriation. Mr. Howard’s talent for playwrighting does not seem forceful enough to hold the piece firmly together.”
(J. Brooks Atkinson, The New York Times, September 30, 1927)

“Mr. Leslie Howard, the English actor, turned playwright last night at the Bijou, and wrote for himself a mild and unhurried farce called “Murray Hill.” It is a droll amusement invading the stately precincts of one of those ancient houses which survive along that gentle midtown rise of Manhattan Island, where crisp spinster are supposed to peer out fading draperies and notice with some alarm that a thirty-story building went up unaccountably across the street fifteen years before.
Into such uneventful premises he introduces a permanent inebriate, and a punctilious fashion plate who is Deputy Assistant Mortician at Crumbles Funeral Parlours, a debonair mourner in love with Amelia, the last of the chaste, chaste Tweedles. There is a will, and a couple of hundred thousand dollars, and a pair of nastly mistaken identities to stir it all to placid merriment.
[…] They get some huge fun out of that blissful drunk and enough momentum to run easily into a perfunctory endlog. But it is slight stuff, cleverly written through much of its tenuous
dialogue and too slow for its farcical business.
Though literate, it is a fragile diversion, which the cast handle with care […] Miss Genevieve Tobin is prettily present, impersonating a blinky-eyed beauty of Old New York, and Miss Gaby Fay performs the bibulous aunti as bibulous aunties no doubt ought to be performed.
Mr. Glenn Anders is cheerfully sot-like enacting, as he must all evening, a glowing stew, who remains brightly maudlin and shows skillfully why indiscretion is the better part of Mr. Howard dialogue.
Mr. Howard performs his hero with ingratiating humor and felicity, suggesting perfectly, I thought, an undertaker who had “cosy interments” for his motto, and could live urbanely up to it, even with his own play.”
(John Anderson, New York Evening Post, September 30, 1927)