Five and Ten (in Great Britain, Daughter of Luxury) – an adaptation of Fannie Hurst’s novel with the same title – was the only film co–starring Marion Davies and Leslie Howard. Actually, Marion wanted him in the Berry Rhodes role: Irving Thalberg, head of MGM had proposed Clark Gable for the role, but Marion did not like him; she thought he was not sophisticated enough for the role. On the contrary, she had fallen in love with Leslie Howard’s performance in Berkeley Square. She was said, many years later, to have been so disappointed when they had met for the first time, because he was much shorter than he looked on stage, that she had insisted that he played love scenes on platforms. Now, I frankly believe this is just another of those naughty tales needed to spice up movie stars’  biographies .

Leaving aside these trifles, a  leading man role in one of Marion Davies’ films was another important step in Leslie Howard’s career. Marion Davies was William Randolph Hearst’s mistress and protegee, she was very popular and very influential. The two actors developed a mutual sympathy, and Leslie and his family became frequent guests at Hearst’s mansion, San Simeon, as Leslie’s daughter recounts in her book; Leslie often joined Marion’s famous parties. Obviously, a lot of gossips arose about this friendship.

Gossips add little to the value of a film. Nevertheless, the couple Davies-Howard has a great chemistry on screen. Besides, Leslie Howard’s acting in this film is very relaxed and natural, and his remarkable performance must have had a positive influence on Marion Davies’ acting; this is one of her best performances. 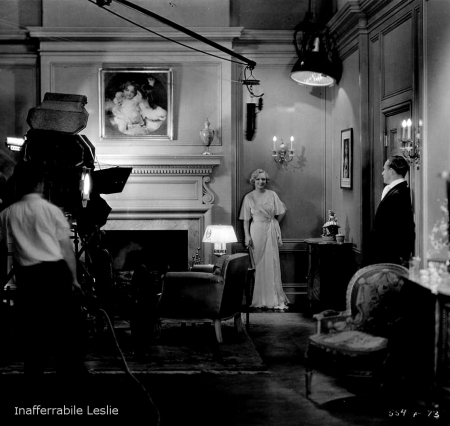 John Rarick, the rich owner of the Five-and-Ten chain, moves his family from Kansas to New York. Nobody seems happy with his decision: neither his wife, who feels neglected, nor his son Avery. His daughter Jennifer would like to be admitted in the city’s social elite, but she is snubbed by her snooty friends. She falls in love with Berry Rhodes, a promising architect, who is engaged with Muriel, one of Jennifer snobbish friends. Jennifer persuades his father to hire Berry to build a new office building. Berry soon falls in love with Jennifer, but does not want to hurt Muriel. After a misunderstanding between Jennifer and Berry, he decides to marry Muriel. When the building is finished, Jennifer and Berry meet  again; they understand they are still in love with each other. In the meantime, Jennifer’s mother had decided to leave her husband; when Avery understands that his family is tearing apart, deliberately crashes his plane. In the hospital, the Rarick family gathers around Avery’s bed, While the Raricks are leaving for Europe, Berry tells Jennifer he will join her as soon as he gets a divorce.

It is a different Miss Davies and an effective one, her ability to convey the depth of suffering being nicely tempered by sincerity and restraint.
Nevertheless, Miss Davies can’t do the tempering for the story and the other characters. Though she has the assistance of such expert players as Leslie Howard and Richard Bennett, the picture resolves into a lugubrious and overdrawn study of woe as it afflicts the members of a millionaire family which has set itself to buck the chilled citadel of New York’s social set. […]
Miss Davies and Leslie Howard play superlatively together, and Richard Bennett’s characterization is clear cut. Irene Rich is sympathetic as the unhappy wife and Kent Douglass appears as the youth who simply can’t stand the strain of it all.
(Thornton Delehanty, New York Evening Post, July 11, 1931)

“Daughter of Luxury” shines above it all for the opportunity it provides to Marion Davies for a display of her brilliant talent as a screen actress.
She still makes a captivating heroine who is not too sure about “her man”. But the merit of the film goes to the discovery it has made of a new star of the opposite sex. Leslie Howard by name, he has all the power and charm of an English actor, coupled with that priceless possession, from the point of view of this country’s audience, a finely resonant speaking voice.
One may see “Daughter of Luxury” and forget it, but the acting of Leslie Howard will remain until his name is being shouted round Broadway.
(The Nottingham Evening Post, August 7, 1931)

Miss Davies achieves a masterpiece of characterization as Jennifer, the courageous heroine of the Fannie Hurst novel.[…]
Leslie Howard, that distinguished young British actor, plays opposite Miss Davies as the architect who mistakes her interest in his welfare. He offers a sterling performance.
(The Daily Star, August 27, 1931)