Never the Twain Shall Meet  (1931) is adapted from Peter B. Kyne’s novel that in 1925 had already inspired a silent movie directed by Maurice Tourneur. The exotic theme was very popular, and W.S. Van Dyke had already directed two South Sea adventures,  White Shadows in the South Sea (1928) and The Pagan (1929).

Never the Twain Shall Meet is one of the films Leslie Howard made while he was under contract with Metro Goldwyn Mayer. This experience helped to establish his popularity; on the other hand, he began to develop his disdain for film acting and his annoyance at film-making routine.

In fact, the film is not very interesting: the plot is trite and the dialogue is sometimes unintentionally laughable. Nevertheless, Leslie Howard gave a remarkable performance, especially in comic situations, and in the unusual role – for him, who always  looked so neat and impeccably dressed – of the alcoholic, dishevelled beachcomber.

Another point of interest is the glittering appearance of  Conchita Montenegro, a very young Hollywood newcomer – she was only nineteen –  who had hastily learnt some English for the role. Anyway, a good knowledge of English was not a prerequisite for the intriguing role of Tamea; some of the most convincing scenes are those in which the naïve girl openly entices Dan Pritchard. So convincing that gossips aroused, despite the age difference (he was 38)  and added another win to Leslie Howard’s presumed palmarès. 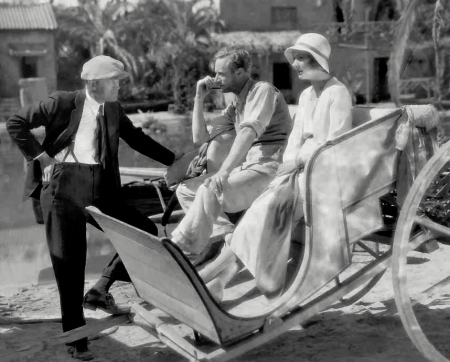 Director Van Dyke, Leslie Howard and Karen Morley on the set of Never the Twain Shall Meet

Plot Summary – Dan Pritchard works with his father in San Francisco. He is engaged with Masie, who doesn’t seem very willing to get married.  Captain Larrieu, a friend of Dan’s father, comes back from Polynesia after having contracted leprosy; he entrusts his daughter Tamea to the care of Dan before committing suicide. Dan has to provide for Tamea’s education and for her future, but the girl cannot get used to the American way of life. She falls in love with Dan and does her best to win his affection. Dan follows Tamea to her island, but the tropical paradise soon becomes a trap. Dan is jealous of  Tolongo, an insolent suitor of the childish Tamea, and starts to frequent the local bar, where he spends his time drinking with other Western cast-offs. But Maisies arrives on the island and Dan returns to reason; they leave together, while Tamea goes back into Tolongo’s arms.

…The action is divided neatly between San Francisco and the previously mentioned coral strand, and Mr. Van Dyke manages both locales very expertly. […]
Mr. Howard comes through with another of his specimens of finished acting, investing his character with humor and personality. That is, of course, before the heat gets him and he decides to go native. After that Mr. Kyne’s story goes its own somber course, Mr. Howard or no Mr. Howard, and the she-is-East-and-you’re-West-and-you’ll-never-be-anything-else type of dialogue gets the upper hand.
C. Aubrey Smith gets in a brief but pleasant bit as the elder Pritchard and Clyde Cook plays a worn-out beachcomber without mannerisms. In the part of Maisie, Dan’s fiancée, Karen Morley plays exceptionally well, and another newcomer, Miss Montenegro, flashes an appealing Latin loveliness in the rôle of Tamea. Mr. Van Dyke’s photography and direction are excellent throughout and in some of his South Sea scenes he reminds the auditors that he was the man who made “Trader Horn.”
(Mordaunt Hall, The New York Times, June 6, 1931)

Some beautiful performances save this talkie remake of the silent that made Anita Stewart famous. Leslie Howard, for instance, achieves real heights in spots, but in others, he’s still too camera-conscious. Conchita Montenegro makes an interesting and decidedly supple-hipped Polynesian maiden. It’s lavishly produced, but after all, the story’s old enough to have known better than go talkie.
(Photoplay, June 1931)

Love, passion, romance and the eternal struggle of “East is East and West is West,” make “Never the Twain Shall Meet,” now playing Loew’s, one of the most colorful romances of the South Seas.
Conchita Montenegro, the sensational Spanish dancer, plays the part of Tamea, South Sea Island siren, and is so real in her part that it seems hard to believe she is not a native.
Leslie Howard is the American lured by the wiles of the little South Sea Island charmer. His infatuation for this beautiful pagan dulls his senses and blinds him to everything but the girl. His portrayal of the slow degeneration on the tropical island is excellent.
(Toronto Star, July 11, 1931)

NEVER THE TWAIN SHALL MEET